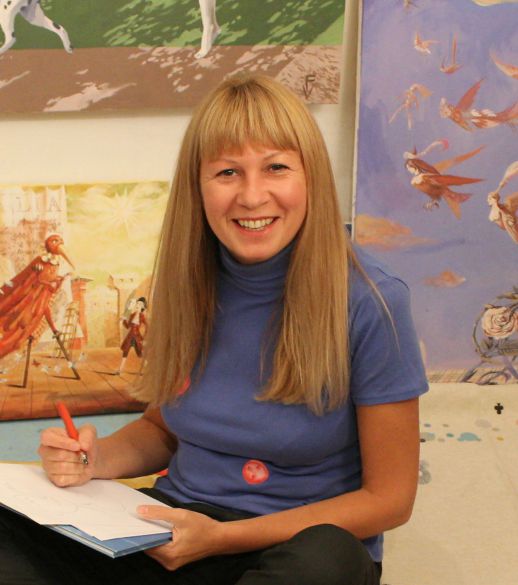 more paintings by this Artist

A member of the Association of Moscow Book Illustrators and Designers.

Нave illustrated more than 30 books published and republished  in Russia, USA, South Korea, Taiwan, Switzerland, Brazil, Italy, France: “Nursery Rhymes”, “The Legend of  Doctor Faust” by Johann Spiess, “Fairy Tales for the theatre” by C. Gozzi, “East of the Sun and West of the Moon” “Giselle” by Adolphe Adam,  “Thumbelina” and  ”The Snow Queen” by Hans Christian Andersen, “The Water of Life” by Grimm brothers ", “A Christmas Carol"  by Ch. Dickens, “Alice in Wonderland'' by Lewis Carroll “Midsummer Night's Dream” and “The Merchant of Venice” by W. Shakespeare, “Planet of Christmas Trees” by Gianni Rodari etc.

“I have an architectural education. And I like this profession. I build the whole world in every new book. And in real space I work as the designer, I project interiors, furniture, fixtures, tableware, fabrics.

I simply like to draw very much. It gives to me physical pleasure. My everyday life also allows many occasions to be glad and be inspired. I love the sun, the sea, theatre, fairy tales, fishes, birds. I like mountains very much, and also bright cities - Venice, Vienna, Prague, Rome, St. Petersburg, Madrid. I love my friends very much and I like to travel! All these things give me pleasure which I wish to share. Therefore I draw!

I like paints on a water basis - a water color, gouache, acrylic. They are mobile and I fill some spontaneity when I draw. They give a miracle a chance to infiltrate "into this world».

When I draw, it seems to me that I open the next unknown country. I see, what are   landscapes, and how people are dressed, etc. The most important thing is - it must be interesting to me to travel there. And pictures will be interesting to»

2014 «English books in Russian style” The Museum of Pushkin. Moscow

Interview with the artist

To me, the act of painting is...
What was the first painting that you sold?
I’m inspired by...
What's your favorite sentence?
When was the last time you got a nice surprise?
A party is no good without...
I wish I had more...
Do you like nights?
I love it when...
A cat or a dog?
If you could no longer paint, then...
My favorite dish:
Bach, Elvis or Madonna?
If I could live forever, I would like to be...
more paintings by this Artist

Other available paintings by this Artist Victoria Fomina: 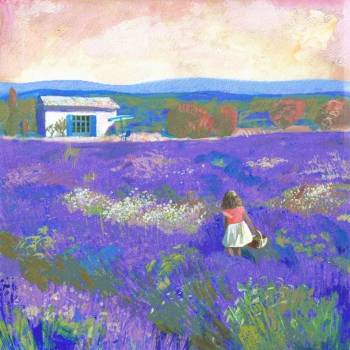 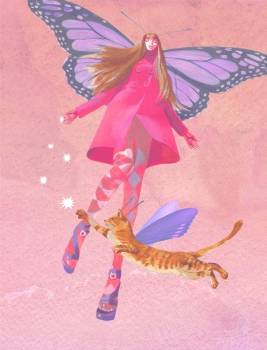 Paintings for kids Price by email

Close
Ask about the painting "Niespodziewane spotkanie"
Thank you for contacting the Gallery. We will respond as soon as possible.
For urgent matters, please call: Paweł Kamiński + 48 600 700 628.
Your enquiry concerns a painting that has already been sold (a painting in a private collection). Some artists agree, however, to paint certain paintings again by special order. If you are interested in the conditions of such an order, przejdź dalej. In any other case, see currently available Artist's paintigs. Artist’s available paintings.
Quick contact: +48 600 700 628